For sets of pictures I like the NextGen-Plugin (nextgen-gallery). It allows very easy gallery views of pictures and – what is also important – the internal media library of WordPress in enhanced by the thematic storing of the pictures.

In practice this means I often use pics from galleries also as single pictures in articles. Nextgen-Gallery has a [ singlepic ] feature, but unfourtunately it doesn’t show captions. That’s realy sucks.

A web search shows me the principle how it canbe solved but I didn’t found a ready to use solution that looks OK. So I write my own and provide it to a free usage.

My solution: Use the singlepic-caption.php from the download below and add your image as follows to the article (remove the spaces befor and after the square brackets:

For a besser separation from the normal text the caption is one step smaller than the normal text and set in italic. I also add an additional vertical space to separate the image better. 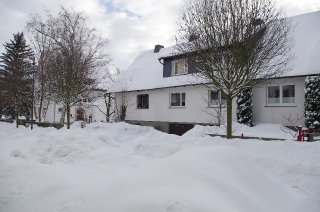 I haven’t translated the german caption in this example, so that the link to the image from the input mask get not lost. The caption means: “The Winter 2010/2011 was unusual heavy”. And the long version in the full screen: “Because of the snow the streets have been made to one way streets, but for all that we don’t know where to bring the whole snow.”

The template can be downloaded here:

It must be extracted and copied to /wordpress/wp-content/plugins/nextgen-gallery/view/ . And these must be done also after every update of nextgen-gallery because the update deletes the whole directory.

NextGen-Versions from 2.x is no longer compatible to this (and many other) add-on. If you want to use the singlepic-caption template and/or if you don’t want to edit all your past posts, please use the NextCellent gallery instead.

Adapted to the newest version of NextCellent-Gallery
Solved a problem with getimagesize and disabled “allow_url_fopen” option in the php.ini

This entry was posted in IT and tagged WordPress. Bookmark the permalink.